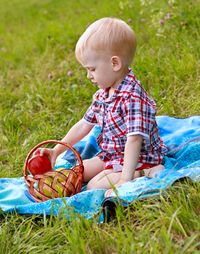 I recently read a column in the New York Times by Jane Brody titled “Trying Anything and Everything for Autism.” In it, parents of an autistic child find success with alternative treatments, but are unsure whether the treatment relates to the child’s improvement. The article quotes a physician from England who suggests that alternative treatment for autism like avoiding dairy is like returning to the Dark Ages.

What emerges from Jane Brody’s column minimizes the two important positive responses that the boy, Casey showed to the alternative treatments of dairy-free diet and hyperbaric oxygen. The difficulties of avoiding certain foods are emphasized, but compared to the Behavioral Approach, which is promoted but requires working with a child for 30-40 hours per week, dietary restriction should be relatively simple.
Nothing is mentioned about the science related to casomorphin from milk affecting brain function, nor anti-gliadin antibody levels indicating wheat sensitivity.
Other non-conventional treatments are also based on scientific data. Genetic defects found in some autistic children in a biochemical pathway called “methylation,” respond to correction with a combination of B-vitamins and other
supplements. Yeast overgrowth in the intestines irritates the lining and allows undigested food molecules to leak into the circulation and irritate the immune system.  This can be corrected by diet changes and supplements. Since specialized immune cells are involved in the nervous system, it is not hard to imagine that improper dietary stimulation of the immune system could interrupt proper brain development.  Far from the Dark Ages, we can begin to understand multifactorial Autism by connecting scientific basis to anecdotal evidence.

My medical colleagues who specialize in autism treatment use the above science-based and other forms of analysis and therapy.  It would be a shame if parents, physicians, and researchers don’t vigorously pursue these connections that may lead to effective treatment. 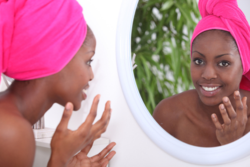 Imagine a hot button that sets off acne when it is pushed. There is such a “button” that has been recognized in cells that sets off an inflammatory response. It is call the “inflammasome”.

A recent study published in the latest issue of the “Journal of Investigative Dermatology” showed that the acne bacteria, Propionibacterium acnes, activates the “inflammasome” in cells, and may be an important part in the mechanism that sets off acne.

While they suggest finding ways to block this activation, I suggest we look for ways to avoid it and keep our fingers off the button. 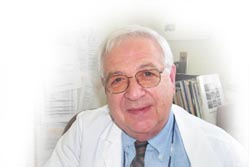 For the past few decades, the role of diet in acne treatment was considered to be a red herring. But thinking is changing in recent years. In part, thanks to a great dermatologist and world expert on acne who just passed away last Sunday.

Dr. Alan Shalita was an expert in both clinical treatment and research in the field. And most impressively, his perspective changed as new evidence cam in.

Years ago, he rebuffed my suggestion that diet might have some role in affecting the sebum in a way that caused acne. But in 2010, he was senior author on a scientific article that re-examined the evidence on the association of diet and acne and he concluded that “Dermatologists can no longer dismiss the association between diet and acne.”

He called for others to explore this relationship between diet and acne, something I have been doing successfully for the past few decades. It is of note that such an expert revised not only his thinking, but that his speaking out helped to change the thinking of the majority of dermatologists.

For the past half a century, dermatologists believed that diet had no effect on acne. It’s time for us to wake up to what we are putting in our bodies, if we truly want clear skin.

For years I have been writing and lecturing that acne is caused by inflammation that comes from within.

It’s not just a “local” process caused by plugged follicles. It’s not just caused by the bacteria Propionibacterium acnes that lives in the follicle. Over the years, more data has accumulated to support this thinking.

The big news is that just this month, an article came out in the most scholarly of all the dermatology professional journals, showing that acne is not only related to inflammation, but also has characteristics of an autoimmune disease.

An article in the February issue of the Journal of Investigative Dermatology showed that extracts from the acne bacteria cause formation of “TH 17 Lymphocytes,” a type of white cell characteristic of autoimmune disorders. This same type of lymphocyte was also found in acne lesions themselves.

The other factors, such as diet, have yet to be connected to the findings in this study, but the evidence is growing stronger that something is lighting the fire to cause the inflammation in acne.

Since most people have this Propionibacterium (acne-related) organism in their skin, the flame that sets it off the fire of acne may well be coming from what you eat.

If you break out in acne, pay very close attention to what you put in your body the few days before the acne explosion. Studying your breakout cycle is the start of natural acne treatment.

There have been a number of observations quoted in the literature of rosacea that is associated with a particular bacteria living in the stomach.

Some, but by no means all, people with this bacteria living in their stomachs get rosacea, and some people taking the antibiotic triple therapy to get improvement in their rosacea.

So here we have a bug that does not live in the follicles in the face that sets off the reaction in the face that we see as rosacea. The ability of an organism at a distant site to cause a reaction on the face is likely due to the immune reaction it sets off. This could be the start of a natural acne treatment.

Another inhabitant of the skin and hair follicles is named Staphylococcus Epidermitis. This form of staph is as common as robins in springtime; that is to say most people have this organism living on their skin.

Nevertheless, there is at least one report on rosacea that seems to be related to it. Whether the individual had some sort of immune defect, or the bacteria had some genetic variation, there is an inflammation caused by it.

There are many other organisms that share the skin, and Staphylococcus epidermitis is valuable because it is a benign bacteria that usually not only does not cause harm: it also occupies the niche so that harmful bacteria cannot find a place to grow. Unfortunately, even this “friend” can sometimes be a bad actor. Here’s a reference to the study.

My seventh grade science teacher used to recite a quote, to give us the essence of the biologic world:

And so it goes with rosacea. A portion of the people with rosacea have organisms living in the follicles that may be part of the cause of the rash.

One of the organisms that has been found in increased numbers in the hair follicles is a mite (not a flea, but a very distant relative), named Demodex folliculorum. A propos to the quote, Demodex is inhabited by a bacteria called Bacillus Oleronius, which itself has been suspected to be a stimulus of the inflammation seen. Would you believe, this bacteria was first identified in rear gut of a termite? It may be involved in causing the downfall of both your appearance and your house!