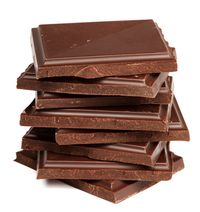 Natural acne treatment is complex, and there are a number of factors determining what will cure your acne, as compared with someone else’s.

Here’s one issue: there have been a number of studies regarding acne that have confused rather than clarified the understanding of what to recommend for acne problems. One of the biggest confusions comes because acne sufferers differ in what causes their acne: this is not a single condition with a single cause.

Studies on acne and chocolate have been done because there are many people who, over the years, have observed acne outbreaks after eating chocolate. For some of those people, eating chocolate occurs when they also binge on sweets or eat poorly and leave out vegetables from their diets. These factors are often left out of studies.

One key study on the effects of feeding chocolate bars, versus similar-tasting bars without chocolate, was published by Dr. James Fulton in 1969. The study observed no difference in acne in those who ate the chocolate versus the placebo bars, and concluded that chocolate had no effect on acne. Thus, an entire generation of dermatologists was trained to believe that chocolate had no effect on acne based on this and other studies. That study is now considered to be flawed in its methods, and its conclusions not valid.

So, the relationship between eating chocolate and acne is not a simple matter, and should not be dismissed with a simple statement, but rather be evaluated in the larger context of the overall habits and responses of the individual. If there is a suspicion of a relationship (between a particular food and an outbreak), and you want to treat acne naturally, without drugs, chocolate should be stopped, and re-added later to see if it causes outbreaks.