If you saw the movie The Incredible Shrinking Woman back in 1981, you’d have a comical view of how toxic chemicals might be affecting us. In the film, Lily Tomlin begins to shrink uncontrollably after being exposed to the wrong mix of chemicals in her home.

While this is an absurd and comical exaggeration, many chemicals do have mysterious and potentially toxic effects on the body. In fact, a large portion of the people who come to my holistic dermatology practice find their skin disease is somehow related to environmental toxins or allergens the body has come in contact with.

Toxins can be spread through the air and into the lungs, as side-stream smoke or factory pollution. They can come in the water, from plastic water bottles or leakage from factories into aquifers, or acid rain. They can come from the food we eat, in the form of pesticides, additive food colorings, flavorings, preservatives, or rancid oils. And they can come through the skin, from cosmetics, soaps, dish detergent, clothing dyes, etc.

Please do not take this information as an argument that you should fear your environment. Humans are an adaptable race and will continue to live on regardless of toxins. But some of us will find our bodies have a harder time filtering out the increased toxins and allergens in our environment.

If an unexplained or un-treatable disease is affecting you, you can begin to arm yourself with detailed information about the chemicals you are exposed to in your daily life. Then, you have the opportunity to heal your condition. In the next blog, I’ll outline some alternatives to hazardous cleaning products. 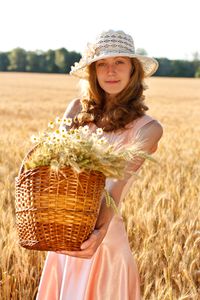 The controversy over sunlight benefit versus danger rumbles on, with new data on both sides of the question.  From the American Academy of Dermatology meeting, two very different pieces of information stand out favoring cautious sunlight protection.  A study recently reported showing an increase in the incidence of melanoma for people who had used tanning beds before the age of 35.  Early damage from excessive light exposure shows up later.
Other studies reported showed that exposure to two times the MED (the minimal amount of light necessary to cause redness of the skin) caused 100 times the amount of messenger RNA for collagenase (the enzyme which breaks down collagen in skin.)  Collagen is the fibrous substance which gives the skin its shape and strength.
Breakdown of collagen is associated with aging and wrinkles.  One half the amount of sunlight necessary to cause redness increased the collagenase activity fourfold.
Furthermore, even one tenth the amount of sunlight exposure necessary to cause redness caused some increase in collagenase activity.
All of the data which was presented demonstrated the various aspects of the process of sun damage leading to aging, at the molecular level.  The speaker is a respected authority on the science of skin aging , so the data appears valid.  I have reviewed other studies in the past which show similar findings, which also lends credibility to his argument.  I will discuss the benefits of sunlight and vitamin D production in later blogs, which inform the other side of this
controversy.  If you sign up for my monthly newsletter, I will email you the top five tips to minimize the effects of solar damage.
Regardless of controversy, sun exposure is a double edged sword with both benefits and dangers.  Living a full life exposes us to both those benefits and dangers; finding the right balance and using protective supplements and
topical antioxidants is the best we can do.To your health, 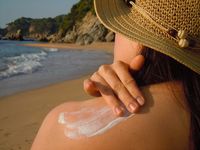 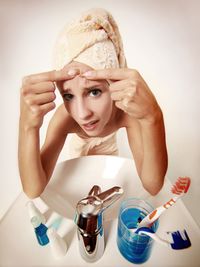 Having an acne outbreak? Bacne bugging you? As a holistic dermatologist, I always
advocate for the simplest, natural solutions to a skin problem.
While acne can have many causes, which should be addressed systematically, here is a great natural solution for relief of pimple pain, redness, and soreness:

The hot water draws the acne to the surface, opens the pores, dries the skin out, and keeps the pimple free of possible infection. Remember not to prod or poke the pimple, as this can aggravate is and introduce germs. Also, make it a habit to take note of anything different you did preceding your outbreak; did you
alter your diet?  the kind of soap you use? etc. As always, the natural approach is to examine the root cause of a disorder that arises.

As always, the content of this blog is for information and education purposes only, and should not be used to
treat or diagnose an illness; please see your physician for care.